Is the cross a brand? In reading about what is generally considered the Christian cross I find that it’s use was rare prior to the fourth century. Then, Constantine the Great, Roman emperor from 306 to 337, implemented it as a symbol for his army, replacing the eagle that was the standard for the Roman legions.  Numerous groups throughout time have used the cross, usually for military applications, such as the teutonic cross and the Knights Templar.

Usually when ‘brand’ is mentioned people think of products to be sold.  This leads to the question is religion a product?  In some cases I think it has been.  Religion and politics have intermingled throughout time, and the furthering of these agendas did not always follow the best of spiritual or religious intentions, but rather personal goals of power and acquisition.  This requires getting people on board with your desires, and thus selling them on your plans.  Essential for product success.

All of this occurs to me as I ponder the nature of ‘branding’.  As a photographer it is difficult for me to come up with a brand.  My work is my brand, so to speak, the above photo is mine.  If you look at professional photographers’ websites you will see little use of a brand.  Usually just one’s name is sufficient and the quality of the work.

A component of branding is that it never change, remaining constant in an ever changing world.  Art and the creative process for me is all about change, evolution.  Ideas come, sometimes they are good from the get go, requiring little editing, and sometimes they undergo a complete revolution, bearing little resemblance to the original.  I change, hopefully I evolve, and if I’m good at it I will bear little resemblance to the original upon my death.  Isn’t this the purpose of all religious philosophy?

About the image:  I created this image for a poster assignment in my Indesign class.  It is a combination of two of my photographs, a catholic rosary and a wall, upon which I laid type to look like graffiti and as if someone had traced words on the inside of the window, which reads, “They know not what they do.”  These words speak to a profound ability to not only forgive, but to understand people’s actions. 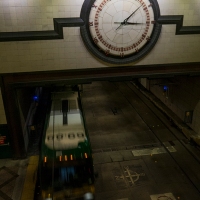